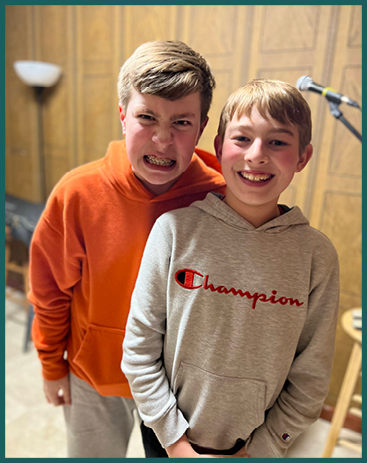 teenagers involved in the past now graduated, beginning ministry last fall at Campus Life South in Arcanum felt a lot like starting over.  But as preparations were being made to restart high school Campus Life, the ministry team found the door to connecting with teenagers at the middle school wide open.  So, sensing the direction of God, the team walked on through.

Walking through the door of middle school ministry at Arcanum led to what seemed like a whole new world of extreme energy, short attention spans, loveable faces, and all-out fun!  In the words of Rachel, the club leader, “Starting from scratch has never felt so intimidating and so exciting at the same time!”  Weekly meetings at the “Vault” in Arcanum have abounded in things like toilet paper games, shaving cream, and cheese puffs.  And activities such as dodgeball, tubing, and marshmallow wars have allowed the energy meter, which was already high, to sail through the roof.  Not to mention, the pictures of scavenger hunt teams conducting memorial services for roadkill will be treasured for a long time.  But in the midst of the fun (and sometimes silliness), something much more important is taking place.

“To me, Campus Life is where I get to be around my friends, play games, and have fun.  I get to forget things that happen throughout the day and just have fun, and I get to learn about God, and that’s always a great thing,” says Bella, an eighth grader.  Bella isn’t the only one that is noticing it is good to learn about God, or better yet, to know Him.  As the year has progressed, the Campus Life team has seen many students soften as they learn about Jesus and find belonging and acceptance within the group.  Recently, a boy who has openly questioned what he believes, sought out a leader to tell them he finally felt “okay to pray.”  He just wanted the leader to know he had talked to God and it “felt okay.”

Some teens have gone beyond just learning about God or checking Him out and have cried out to Him in the midst of their pain.  Last month when the teens had an opportunity to write a letter to God, their letters could be sealed (so only God could see) or open (so that any of the adults could see). Here’s what one student said in an open letter:  “Dear God, I thank you for helping me through all the hard times and letting me live.  I’ve gotten through some hard things.  But my mom still screams at me and I still can’t tell if my parents are getting a divorce or not.  I hope my brother still talks to me after he graduates.”  That evening, many of the kids wrote open letters that tugged at the leaders’ hearts.  Only God knows the cries for help that were within the envelopes only He was allowed to see.

The night teens wrote letters to God is just one experience that has shown God not only opened the door to middle school ministry at Arcanum, He is now opening the doors to kids’ hearts as well.  Many other moments have demonstrated this too. Please pray for the young people who are being reached by this ministry.  Pray that not only will they open the doors of their hearts to Jesus, they’ll gladly invite Him in.